The wheelspin is an action that can be performed by the cars in the Carmageddon series, unlike in real-life[confirmation needed].

When turning, if the player presses the wheelspin key, it'll make the car turn even more, but this can lead to loss of control.

While it may just seem like an alternative to the handbrake, it actually has some differences. Aside from the obvious fact that it doesn't brake the car, the wheelspin is used to actually make the wheels spin better, whereas the handbrake makes the car stop and spin in the process.

It may be useless to beginners, but this is a must to master by professionals. Pros use this in the best times to help them turn better than the handbrake ever could. 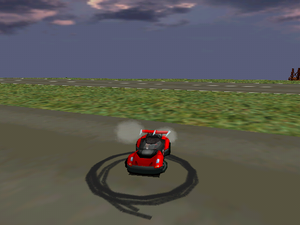 The Eagle 3 doing some doughnuts.

The wheelspin key has more purposes than just spinning:

A good way to turn from a stop is to hold the direction in which to spin, and then hit the accelerator. When the car is moving, press the wheelspin key repeatedly and the car will spin faster.

To turn the car back when driving, turn to the direction you want to spin and press Z, and quickly press and hold the handbrake. Although this is a bad idea if the car is going at speeds over ~80.

To make doughnuts on the floor, press and hold the wheelspin, forward and left/right keys simultaneously. This is best done from a stop. Oddly, the cars weren't made to do doughnuts in Carmageddon: TDR 2000, or if they were, this is not the way to do so. Trying this will make the car spin, but once it reaches a certain angle, it'll spin in a different one.

When the car is over something and can't get out, such as a pedestrian's corpse, pressing the wheelspin key repeatedly will make the car wobble over it, and it may be able to free itself. This doesn't work in Carmageddon. 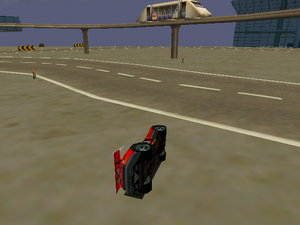 The Eagle 3 on its side.

If the car is laying on its side (see screenshot), one can press the wheelspin key repeatedly to make the car drop to its wheels. This doesn't work in Carmageddon.

The wheelspin in Carmageddon 64 makes the car spin a lot more than the PC games. Also, trying to perform a doughnut will make the car spin around in a fast and unrealistic manner, due to a really messed up glitch. Read about it here.