During the prototypes' development, some ideas are canceled and removed from the game. However, some of the developers' original plans are still kept in the games, but are not used. This content can be retrieved by meddling with the game's data files, and sometimes, can even be altered to bring the original ideas back to life.

The official Carmageddon website had shown a weird hovercraft vehicle for Ed 101. It's completely different from the Tashita. However, the strangest part is that its textures are still in the final game, and not where one would expect. It's in DEZRACE2.PIX, the file that stores Devil's Canyon Mining Town's textures. Check out the gallery for the textures.

Amongst the regular powerups, there are some that can be activated with cheats, but not found in-game, and others that are found in the game's string files. 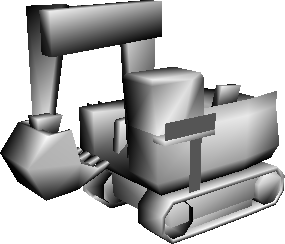 When the player completes the game in any difficulty, they unlock all available vehicles, including some that don't enter races normally. Amongst those lies Ron Dumpster, and selecting him in the garage will reveal that he has no picture. This is because the car isn't implemented in the game; it had to be cut off from the final version of Carmageddon II. Trying to play as him leads to a crash. 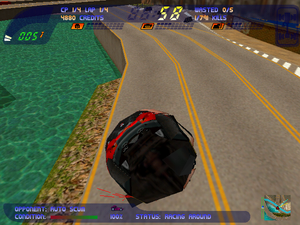 Max Damage in the SGoD form.

This weird mode is very mysterious, and the methods necessary to activate it are far from simple. There is a cheat code to do so, but nobody knows what it is.

When in this mode, the car transforms into a giant indestructible ball (hence gonad). This ball is hard to control, but it packs a brute force.

As with earlier games, each vehicle was given some info to display on the Choose car screen, such as vital statistics (top speed, kerb weight, 0-60 speed), a name for the vehicle, the driver's name, and a brief description. For unknown reasons, the driver names and descriptions (as well as "short names") were removed from the game late in development. Therefore, most people know the TDR2000 cars by their vehicle names. But these details are still in the game files.

When selecting The Fortress, the words "She's FORT KNOX" can be seen in the last line of the info-box; somebody didn't remove it right. Further inspection revealed that all the aforementioned information is in the Car_Strings_UK.txt file, inside the UK Strings directory. It doesn't even have to be decoded!

When it came time to create the Nosebleed Pack, it had already been decided to not use names & descriptions, so none were written.

The following powerups can be activated with cheats, but cannot be collected normally. Some don't work at all, others cause some weird effects, and others work as intended.

In races.txt, there are references to two cut levels. These have been commented out so the game doesn't load them, but unfortunately, their files are gone, so all that remains are these references in the races file.

The very first race was meant to be called "Break Test", probably used to test some of the game's mechanics. This syntax is slightly different from the one used for the final levels.

GyroBox was created later in development, as evidenced by the data values' syntax. It's a normal multiplayer stage that was left out for unknown reasons.

The fifth icon image in the Nosebleed Pack.