For the key that recovers the player, see Controls#Recover. 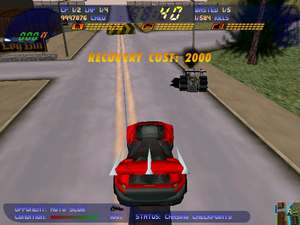 Max Damage being gently dropped after a recovery.

When racing, the player won't take care with his(her) car, and accidents are just waiting to happen. There are times when the player flips trough the air and doesn't land correctly, ending up on the roof of the car, for instance. This doesn't mean that the player needs to restart the race to get back on his(her) wheels, as (s)he can simply recover the car.

Recovering the car places it on all four wheels on a nearby spot, a place where the player had previously been. For instance, if the player is driving safely along the road, and at the end of said road lies a ramp. The player jumps on it and doesn't land well. Recovering will place the vehicle at the previous safe spot: the road. Water isn't considered a safe place, so if the player wonders around underwater for several minutes, recovering will place the player outside the water, where (s)he was before entering it.

But the player doesn't need to land on his(her) roof to be able to recover. One can recover the car at any point during the race. All recoveries cost money, however, and the amount isn't that easy on the wallet, neither; so just recovering for no reason, or for some minimal reason may be dangerous to the player's credits.

To recover, the player only needs to press the recovery key once. However, there are situations where the player's vehicle is automatically recovered without interference. If the player drops on a bottomless chasm, the game will recover the car automatically, still charging full price.

In network games, the player must first wait some seconds before the recovery actually takes place. This is to prevent the player from getting out of the way when an opponent is nearly smacking them against a wall, although, if done with proper timing, this is still a possibility. When the countdown is taking place, the player can cancel the recovery by pressing the key again. If the recovery already happened when the player tried to cancel, the game will say that the player is too late.

The player may use the fact that recoveries are free to be activated whenever (s)he wants, to create a good amount of damage, if done right. For instance, an opponent is next to a wall, and one smacks it. During some seconds, (s)he is unconscious. This is a great window to reverse for a while, and hit him(her) again before (s)he wakes up. This can be repeated some times to cause good damage. However, it may take some time to go all the way backwards and then forwards, and some times, the stun isn't that great and the opponent ends up getting out of the wall before the player has a chance to hit him(her) again. Using recoveries, the player can quickly go back to a few distance from the opponent, and just needs to drive forward. Upon landing a hit, the player can recover again to quickly go back, and land another blow. This can be repeated until the opponent is wasted or manages to leave, but it's also very expensive.

Normally, the computer players cannot recover on their own, at all. But there are situations where they will, for example, when falling down an endless pit. Like the human player, they'll recover to a previously safe position, but credits don't work for CPU players. However, on Carmageddon, a CPU player that falls like that won't be recovered, and will end up getting wasted. On the PlayStation version, the CPU players do have the ability to recover any time they want, though.

The CPU players in Carmageddon II are be able recover in the middle of the race like if they were a human player that decided to recover. This happens when certain criteria is met:

In rare circumstances, their recovery may lead to a glitch where the CPU player will be taken completely out of the map, but still being shown in the map, as the human player is needed to be far away from them to be recovered, hence they will not be rendered as solid objects. The engine will be unable to make correct calculations for the new destination and will place them on map only, but not physically.

As written above, there have been reports of recovering CPU players in Carmageddon 2. However, such reports are a lot more frequent in Carmageddon TDR 2000. The opponents just seem to recover almost whenever they feel like. The animated image shows the Master Mine recovering without being off-bounds or anything. Although, he could be considered stuck, seeing as he was a bit trapped on the checkpoint, but it's still not a big reason to recover.

In Carmageddon (Game Boy Color), there is no key to recover the car to a safer position - nor is there any need to. The cars' physics in this game don't allow them to topple on to their roofs or sides, and bottomless pits are blocked, even when they shouldn't be (for instance: the edges of the USS Lewinsky are solid).

However, a recovery system is still implemented in the game. It's not activated by button presses, but rather automatically. Thanks to the kangaroo on command/handbrake "powerup" that the player starts each race with, one can jump over anything that bounces the player back. This includes walls, edges and the like. If the player manages to jump over it and land on solid ground, (s)he may resume driving normally. Else, the car might get stuck inside the wall or off limits, and will automatically recover in a fashion similar to the other games.

When the player is driving on the ground, a timer counts down from 5 seconds. When it reaches 0, the records the player's current x and y coordinates, and the current direction. If the player is stopped, airborne or underwater, the timer will not move. When the position is recorded, it's added into an array, ejecting the last recorded position and moving all the other positions back by one.

When the player recovers, the game will re-place the car in the earliest recorded point. However, if the array is fully used (by recovering several times), the game will, by default, transport the car to the beginning of the race. This array can only keep 20 positions.

Previously, it was believed that the game had pity and recorded a "safe spot" when the car touches the edge for a second and falls off. When the player recovers, the car will be placed next to the landing point, avoiding another jump. This, however, turned out to be just the natural timer reaching 0 when the player landed, and not a sympathy action by the game.

These are the default keys/buttons to recover the vehicle.

Unless the player has any Free Recovery Vouchers left, these are the costs for a single recovery in each game.