All software passes through several stages during development. At some point, some ideas were considered to be added in the final game, but for whatever reason, were removed. Some of them though, have been demonstrated in the form of a video or screenshot, mostly for magazines that advertise the coming of a new game. Some of the material is also kept in the final game, albeit unused. The following is a list of information gathered on the developer's original plans, that weren't carried on to the final product in any form.

The Unlock Everything cheat code also activated Edit mode, meaning one didn't have to go in-race and type IBETYOUCANTPRINTCUNT. A WALLX.ACT file also existed in the "DATA\ACTORS" directory, with a hidden message for "adults only!". Andrej Anastasov Score Magazine [1]

Several images can be accessed that were used as placeholders during development. These include amateur scribbles, early level info screens and an old Auto Scum mugshot. There are also a couple of cutscenes that are not used in the final game.

There are a whole bunch of vehicles that didn't make it in, and some of them are pretty crazy - from the Bluesmobile and a massive crane, to a ridable banana and giant cow. They are called the Cameron Cars, named after the staff member who released them. Errol of Toxic Ragers rigged them and gave them attributes, So they could be used in-game. The gallery of finished cars is here.

Not only did the guy make crazy cars, he made barmy Peds too: Hamsters wearing suits, women on bicycles and Cameron himself! [2] 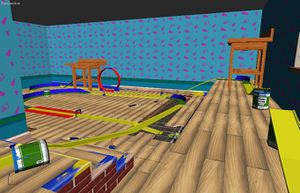 Stainless Software made a level based on a Hot Wheels toy track to pitch such a game to Mattel. The theme is a room being re-decorated, with a plastic toy track laid out on the floor, complete with loop-the-loop. The level is large, so racers appear to be toy cars themselves. As the project didn't go further, the level was also given to, and released by, Errol.[1]

Some screenshots were shown off during development, that now reveal some changes from the final version. For instance, the Eagle 3 had a rusty underside, the Prop Shafter was orange, the fonts were different, and the mini-map lacked the Altimeter. These shots can be seen in X-Cult's articles.

This game had many screenshots released during its development, showing features that were changed or removed from the final release. To see a video of an earlier version, go here.

In an early build of the game, the HUD was much more stylized, made from clean silver curves. The very first version was at the bottom of the screen. One iteration had an indicator for driver damage as well as vehicle damage.