Pedestrians (commonly shortened to peds) are one of the key features of the Carmageddon franchise. They wander around the levels aimlessly, or hang around in groups, just waiting for the player to approach them. When they see/hear the player, they will panic and start running. Killing a ped will earn bonus time and credits. A level can be won by killing every single pedestrian in the location (except in Carmageddon (Mobile), where peds can respawn after death).

Many of the powerups that can be collected affect peds rather than competitors - one obvious example would be suicidal pedestrians, which causes them to run towards the player's car rather than away from it.

In Carmageddon & the Splat Pack, pedestrians are 2D sprites based upon digitized photos of actors (the same method used in the Mortal Kombat games) and die when touched. Types of pedestrians include people, Grey aliens & cows. The Splat Pack added rams (sheep), demons and boars.

In Carmageddon II peds are in 3D, made of textured polygons. They can be dismembered, often losing limbs when hit; however, they can lose and arm or a leg and still live. They can plead for their lives, and be scared into jumping off cliffs (using the horn). Aliens returned (specifically Greys); they appear in all versions of the game, hidden in the I Want to Bereave level. Several animals were added.

Ped against a wall, with weapon.

In Carmageddon: TDR 2000, pedestrians can attack vehicles with metal bars and Molotov cocktails, but don't worry, they're still not much of a threat. These smarter peds can flatten themselves up against the nearest wall to make themselves harder to hit. Instead of screaming, peds will now usually insult the player or comment on their near-death situation. A different selection of animals appeared.

The console versions vary: The Game Boy Color and 2D Mobile versions are simple sprites; The Game Boy zombies leave a smear of green blood on the road, while the mobile peds disappear in a red splat. Carmageddon 64 has zombies, similar to Carmageddon II's. Carmageddon (PlayStation) has an odd censorship; they are polygonal zombies, which rise from the ground at the beginning of a race, and instantly fall into it when hit by a car... in a shower of red blood.

Animals are affected just like regular pedestrians, which means that even though the name pedestrian means a human that walks on the street, the Carmageddon games accept all animals as peds as well. Regardless, some of the animals in the games have some absurd characteristics. The following is a list of animals in the games and their oddities, if any.

Carmageddon 64, the Game Boy game and the cellphone games only have human pedestrians.

Horses were included in an earlier version of TDR 2000. 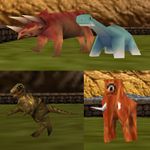 Due to the controversial nature of killing people for sport, in many regions the games were censored, swapping the humans with red blood for Zombies with green blood. Carmageddon games for sale in Germany received the most censorship, and therefore included the strangest things to run over: In Carmageddon it was Robots that leaked black oil, Carmageddon II featured reptilian aliens, and Carmageddon 64 had dinosaurs!