The Mr. Jolly Fairground is the sixth location in Carmageddon II. Like its name points out, this is an old fairground that features a lot of attractions found in carnivals.

The ground is mainly dirt, except that there is a regular brick road circling the fairground, and to the North and Southeast are small mounts with grassy terrain. To the West is a big lake. Other than that, the environment's biggest gimmicks are the attractions.

To the West, next to the lake is a roller coaster, with coaster cars riding it. Touching them can be a bit problematic, as it jams up the "traffic". The entrance is at the North, in a small building. Right there, the ground levels with the roller coaster, allowing the player to enter it. Seeing as it was not made for cars, the player must be careful when driving, because curves aren't automatic, but the effort is rewarded with an extra offensive powerup. The player takes around 2:30 minutes to make a full lap.

To the East is a water coaster, also with coaster boats on it. It's harder to jump out of this ride, and the water can make navigation rather difficult. The entrance is at the Southwest, where a ramp takes players to the starting point. The player takes around 1:30 to make a full lap. Unfortunately, the player cannot get out the same way (s)he came in, because entering requires dropping on the track. Luckily, the ride has several upward ramps, and the player can easily jump out of them to the ground. 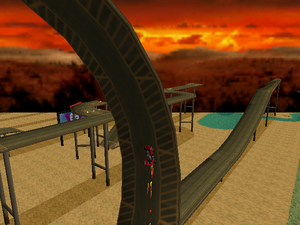 The other attraction is the stunt track that covers a big part of the fairground. The track is mostly on high ground, and some of the jumps are rather risky. The player usually starts at the ground level piece of track on the Northeast, facing South. The track makes some ups and downs, and then a large jumping ramp appears. The recommended speed to jump to the other side is ~110mph. After a while, the player must jump over some broken sections of the track. ~80mph is a good speed to do so. A large loop is the player's final obstacle. It requires some speed to pass the trough, and it's recommended to stay close to the left at all times, because, at the end of the loop, the pillars supporting it appear on the right part of the track, and with the speed the player takes, these pillars can be dangerous. The player takes around 1:40 to ride from start to finish.

Another small attraction is at the center, a bit to the North. Two ramps are facing each other, and in the middle is a large pillar, with two giant rings of fire on either side. The player can cross all four rings, and ~90mph is a recommended speed, although this is very hard, and generally brings no reward (it's preferred to go slower to land on the pillar and claim the extra armor powerup).

Despite the terrain being almost all dirt, this level is one of the best in the game. The attractions are normally very amusing and lead to some easy APO powerups. The location is also rather small, so finding opponents isn't a problem most of the time. The number of pedestrians is less than 200, so it's quite easy to kill them all.