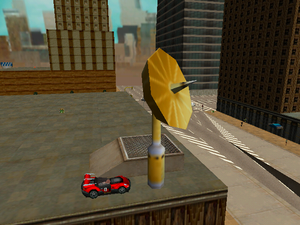 Some elements of a location only appear on missions.

Missions are levels with a set of objectives to complete within a time limit.

Missions first appeared in Carmageddon II, as the final level in each tier. They mainly involve destroying a number of targets, such as certain pedestrians, radar dishes and generators. Extra time is normally not awarded.

The Playstation version had missions of a similar vibe - At the end of each tier, the player is given a level where they must destroy all zombies, or one where they have to race through all the checkpoints. Completion of each mission rewards the player with a video, showing a guy in a television, a cow on wheels and stuff falling out of the air.

Carmageddon: TDR 2000 expanded on the idea, including multiple objectives in any given mission level. Despite many missions involving the collection of bomb parts scattered around a level, others showed more variety; destroying certain opponents, racing across an obstacle-strewn bridge, and stealing a tank to escape from an area, among others. Every other race was a mission, and the player still needed to complete the last mission on each level in order to move to the next.

The original Carmageddon, its expansion the Splat Pack, the Nosebleed Pack and the Mobile Phone versions[confirmation needed] do not have missions.

These are the navigation boxes used in the wiki.