The El Morte Desert is the ninth location in Carmageddon II and Carmageddon 64. This huge, sandy desert doesn't feature much more than sand, cacti and rock - everywhere. In I Want To Bereave, there is a UFO between the pyramids.

This desert is mostly sand, but it still has a number of things one wouldn't normally find in a desert. Mainly because it's a desert, but not deserted. Several roads are found crossing all over this sandy realm, as well as some tunnels and other human-made structures. 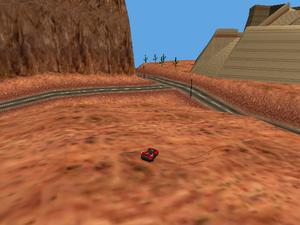 Max Damage next to the weird building on the East.

The Western part of the map is fully sand. Road starts to take over near the middle, but before that, there are two pyramids next to each other. While the angled sides can be tricky to scale, their tops are flat, so the players can drive on them. A picture of an alien is drawn on the pyramid tops; Maybe the aliens are inside? If only there was a level that would allow the players to take a look inside, like I Want to Bereave...

The center of the map has some cliffs. On top of them might be nothing special, other than an Easter Egg. These cliffs still exist in order to eliminate the ground-level monotony.

A bit to the Northeast from the map's center is a small oasis with a circular island. This islet holds several APO powerups, but reaching it is rather tricky, especially because it's surrounded by water.

To the North and South, tunnels have been built inside the cliffs. These are rather simple, but it may get cramped in there.

To the East is an hexagonal structure that's a bit hard to explain, other than serving as a good tourism spot.

At the far Northeast is another island. Despite being far, a bridge and an underwater tunnel (which looks quite nice, incidentally) allow access between it and the main desert. 5 huge silos are on this island, and they have some misc. powerups on top.

Due to this location being rather monotonous and irregular, most players chose to avoid it. The assorted features, like the islands and pyramids may provide some fun, but it's usually not enough to make this level really fun.

A huge amount of APO powerups are on the island at the center. Reaching it is hard, though, even with kangaroo on command. Speaking of which, this is not easy to find in this level either. There is one at the West of the two pyramids, in the middle of a batch of white pickups.

Some assorted powerups can be found near some of the oil wells. If you know where they are (thanks to Oil be Blowed), check around them.

There is an extra power pickup in the center of the hexagonal structure in the East. On the top part of it, there is also a solid granite car powerup at the tip of a very thin platform.