(Redirected from Easter Eggs and secrets)

The Carmageddon series feature a multitude of neat easter eggs and secrets. 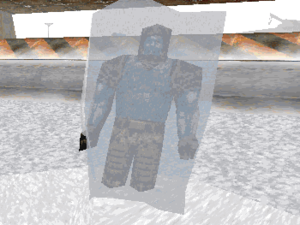 The MagnaChem Abandoned Ice Station features several men frozen in ice - they are in fact the player model (Ranger) from id Software's Quake. The first level they appear in is actually called 'Icing on the Quake'. 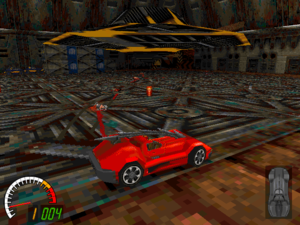 The UFO in the Devil's Canyon Mining Town.

In the Devil's Canyon Mining Town, there is a pyramid-shaped building near the town's center. If the player enters it through the openings on the top, in the Roswell That Ends Well level, they'll spot a UFO.

A 2-part video with a compilation of secrets can be found here. 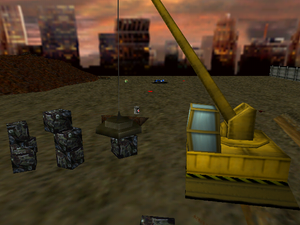 A magnet pulling a piece of scrap.

Normally, the magnets at Max's Junkyard don't interact with anything; specifically, they don't attract metal like real magnets would. Well good news, this ability is in the game! The problem is that there is no in-game menu option to turn them on; it can only be changed by editing the options file directly. If you are unsure of what you are doing, create a backup of the OPTIONS.TXT file. If something goes wrong, just restore it.

Open the OPTIONS.txt file found in the DATA folder (in your main Carmageddon II folder). Next, search for the line that reads RussellsFannies 0 (line 40) and change the 0 to 1. Save the file and load up Carmageddon II. Go to Max's Junkyard (any race) and approach a magnet. If everything went well, the magnet should pull you in! It's not that hard to get out once grabbed. You can also push a scrap car and it'll also grab it. Secrets video 2 at 1:06. It also seems this turns on the fans in the level, such as the ones in the race Shove Thy Neighbour.

According to Nobby, Russ, one of the developers behind the game, added that feature in secrecy. The physics-handling crew was then worried it would break the physics. Luckily, it didn't, and ended up remaining in the game for the final release. [1] 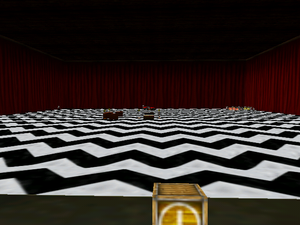 The secret room in Carmageddon II.

At the Beaver Woods is an easter egg in the form of a hidden room as a reference to Twin Peaks. It is located at the South of the map, inside the wall, and above ground level. The player can access it via the following method, or by using the fly mode.

The player must search for a sign. Looking at the roads around the houses will reveal one junction with an arrow and question mark painted onto it. It looks to be pointing along a road that, shortly after, turns to the left. In reality, it's pointing to the wall where the easter egg lies - the hill at that point is fake. Using Kangaroo on Command, the player must speed towards the wall and jump once or twice. If done correctly, the player will pass through it and enter a room that looks like the Black Lodge. This room has some misc. powerups, and the gravity works as if the player is underwater. To exit the room, it's almost mandatory that the player collects one of the Drugs pickups. Secrets video 2 at 4:18.

In the I Want to Bereave level at the El Morte Desert, a UFO can be seen floating between the pyramids. This Unidentified Flying Object can be interacted with - the easiest and most dangerous way to do this is by parking under it, then jumping repeatedly using Kangaroo on Command, smacking into it. If the flying saucer is touched in any way, it'll say the following: "Greetings Earthlin... aargh!". Maybe the aliens came in peace, but the player's pesky brutality destroyed them. Either way, after their failed attempt at greeting a murder vehicle, the UFO will lose its hovering ability and crash down to the ground. This is why using kangaroo on command from underneath it is dangerous: if the player isn't fast enough they can get squashed by it. A safer way is to jump on it from the pyramids. Secrets video at 3:19.

Not exactly a secret per se, but the truth is that the lower deck of the USS Lewinsky can be accessed outside the Hard Core mission. To enter it, the player can drop from the main deck, to the small triangle visible on the map, at the Northwest. The player will fall through the water and land on the lowest deck. Being underwater, cheats should be used to have Underwater Ability. From here, it may be a bit hard to get to the rest of the deck. If an opponent passes trough the lower deck's door and gets stuck there, this is a way to get to them. Secrets video 2 at 2:07. 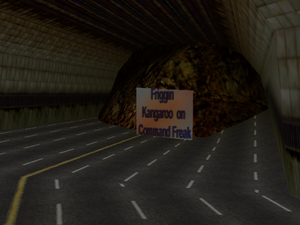 The player starts crossing the Bridge from the North of the map, because one of its ends was broken down. However, the other end of the broken road is still intact, and it leads inside a tunnel. Looking up shows that the tunnel is rendered, and that there could possibly be stuff inside it too.

Unfortunately, there is no easy way to go there. It is possible to get in with a Wall Climber powerup which often spawns nearby, but this is extremely difficult as the lip of the road within the tunnel has an overhang. The alternative method is to get some Kangaroo on Command powerups, but again, one must be extremely lucky with the level's powerup spawns and even then it is difficult, as this method requires three precise, consecutive jumps. As such, the easiest way to access this room is by using cheats, or the Action Replay's manual camera. 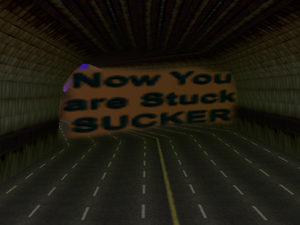 After moving back a bit and jumping inside, similarly to how the Twin Peaks room in Carmageddon II is accessed, the tunnel is entered. Moving inside the tunnel to investigate reveals a sign insulting the player for being a Kangaroo on Command enthusiast: "Friggin Kangaroo on Command Freak". The tunnel builders had some issue with the player, for some reason, as they also lock them up in there. Trying to turn back will reveal another sign floating, saying "Now You are Stuck SUCKER". But this sign wasn't present when the player came in! This is a wall that only has one side rendered and solid, which means that from the other side, the player may pass through it, and see through it, but the same doesn't apply to the rendered side.

The only way out now is to recover to a previous spot. The Action Replay's manual camera can also get stuck inside the tunnel.