While it does appear as an opponent, this vehicle is only playable by using the 'all cars' cheat code. 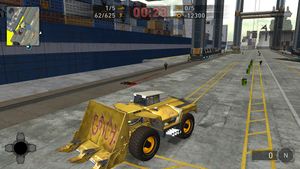 In the drivers and vehicles section of the Reincarnation section of the Carmageddon.com, it has been confirmed that The Plow will return. The plow appeared in Early Access Update 2 on May 7th 2014. It was later textured and considered finished in Update 3 on June 18th 2014. It now has 42 painted on its side as its race number, whereas the original Plow and the Plow 2 were both number 24.