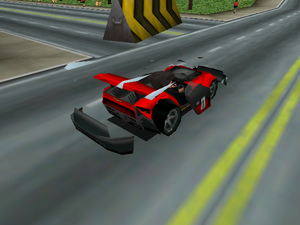 The car suffering crushage due to the bodywork trashed powerup.

Crushage is the term given to the damage of the cars' bodywork.

Although it may sound like a conjectural term, it is official because it appears as a damage mode in Carmageddon II's cheat mode. The "-age" suffix means "quality of; act of", and as such, the term crushage comes from "crush" and "-age"; which means the act of crushing.

Yet, crushage doesn't quite mean the act of crushing, but rather the crushing itself, like damage ("dam" "-age").

Differences between crushage and damage

Crushage refers to the destruction of the car's physical aspect. This includes the bodywork, glass panels (e.g. headlights, windscreen) and other small, non-essential parts. Damage is actually referring to the damaging of the car's vital components.

This is to say that when a car has lost, for instance, all its glass and nothing else, it shouldn't be referred to as "damaged", but rather as "crushed".

Seeing as the wasted state can only be achieved once the car has received enough damage, the car cannot be wasted if it had only suffered crushage. 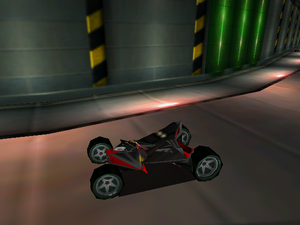 Using cheats to disable damage, and by collecting several mines, the Eagle 3 can be wildly deformed, but perfectly operable.

It is possible for crushage to have an indirect effect on gameplay - most cars have bonnets which can be bent or twisted upwards, smashable windscreens, or crushable ceilings. Any of these can serve to obscure the in-car view until the damage is repaired.

However, that's the only gameplay effect crushage can give. A fully crushed vehicle can still be driven perfectly, even if the mangled parts stick out and seem to obstruct the wheels. While it's possible to twist a car out of shape to the point where it becomes difficult or impossible to drive, that is a function of damage to the chassis, rather than crushage.

In Carmageddon II's edit mode, the F6 key changes between vulnerability mode combinations. If the car is invulnerable to crushage, smacking against a wall at high-speed can, and will, cause damage to the motor, but the car will not look even scratched. Similarly, if the car is wasted (example: explosions), it'll still look flawless, while its key components are severely damaged.

If the car is only vulnerable to crushage, only its aspect will change. This means that driving at high-speed against a corner will probably chop the car in half, but no damage will be suffered, nor the car will be wasted, case the car is also invulnerable to wastage. 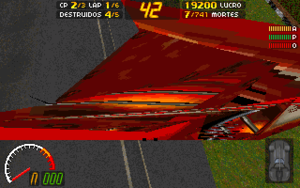 The Eagle II mangled beyond recognition.

Carmageddon doesn't support loose parts, so when a car is crushed, only its main framework is mangled. Thus, when the bodywork trashed powerup is collected, no parts fall off, and instead, the car's model gets deformed; some jagged points are added. However, if this is done too many times, the framework will eventually grow into a mess of jagged beaks and mangled parts. It can even grow to a point where the camera, zoomed out at max, can't show it all.