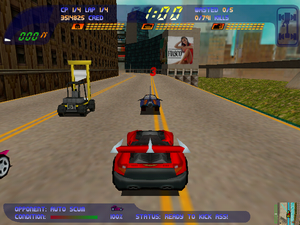 A race waiting to begin. The countdown is currently at 3.

Whenever a level is loaded, the announcer(if there is one in that game) will be heard saying "Five..." (meaning "5 seconds to go"), and the number 5 will appear in the centre of the screen. He will continue to count down to 1, the number on screen changing to match each time, until both he and the text say "GO!". This is the point where the race timer starts to count down, and the cars can actually move. When the countdown is still running, no car can be moved, but oddly, the player can recover when the race hasn't even started. Everything else still moves freely.

Some racing games (e.g. Mario Kart) punish the player for revving up too high during the countdown when the race starts, and reward them with an extra boost if they only hit the gas when the countdown reaches "Go!" (or have the right amount of revs at the same point). This isn't the case for Carmageddon games. The player may rev their engine from the start, in forward or reverse gears. While this allows the player to set off faster (forwards or backwards), it'll not make the car move until the countdown finishes.

There is a special pedestrian in Carmageddon and Carmageddon: TDR 2000: The flagman. His job is to wave his checkered flag when the countdown finishes. Unfortunately for him, he's stood directly in front of the racers on the starting grid. Being a special pedestrian, he rewards the player with more credits than the regular ones. If the flagman has survived for a whole lap, he'll be worth even more.

The player is able to skip the long countdown and start the race ahead of his/her patient opponents. To do so, (s)he must merely press the wheelspin key (default Z). Remember, this isn't fair, and the announcer will catch you skipping the countdown. He'll exclaim "Hey! You!" and a message saying "Bad boy!" or "Bad girl!" will appear on screen. Next to that message, the following appears: "1000 credit fine". That's right: skipping a countdown will deduct you some credits!

In Carmageddon: TDR 2000, the player will only be caught skipping if s/he actually moves from his/her grid position. The wheelspin key still needs to be pressed before the player can skip.

Skipping in Carmageddon 64 and Carmageddon (Mobile) won't stop the countdown, which means that the player may get on with things while their opponents still wait for "Go!".