Default: Numpad 8, up arrow in CarmaTDR, X in CarmaPS, A in Carma64 and CarmaGBC.
All games.
This is the control used to move the car forward, the equivalent to hitting the accelerator on any regular vehicle. If set on an analog stick, the more the player tilts the stick, the faster the car will accelerate.

Default: Numpad 2, down arrow in CarmaTDR, Square in CarmaPS, B in Carma64 and CarmaGBC.
All games.
This is used to brake the car when it's going forward, like the regular brake on any vehicle. However, once the car is halted, holding this key will make it drive in reverse (automatically switching to the reverse gear, unless specified otherwise). If set on an analog stick, the more the player tilts the stick, the faster it'll accelerate backwards, and the stronger it'll brake.

Default: Spacebar, Triangle in CarmaPS, Z in Carma64, A+B in CarmaGBC.
All games.
This makes the car break with more force, just like the handbrake on any other vehicle. If used during a turn, it'll make the car spin.

Default: Q.
CarmaTDR only.
Increases the current gear by 1, if it's manual.

Default: W.
CarmaTDR only.
Decreases the current gear by 1, if it's manual.

Default: 0.
CarmaTDR only.
Switches to reverse gear just like in any other normal car.

Default: 1 - 6.
CarmaTDR only.
Switches to the specified gear just like in any other normal car.

Default: M.
CarmaTDR only.
Makes the camera follow an opponent.

Default: Backspace, Circle in CarmaPS, R in Carma64.
Not in CarmaGBC nor CarmaMob[confirmation needed].
Repairs damage caused to the car's bodywork or essential components. This costs you credits, however.

Default: Insert, Return in CarmaTDR, R1 in CarmaPS, L in Carma64.
Not in CarmaGBC nor CarmaMob[confirmation needed].
Recovers the car to a previously visited safe spot, on its wheels.

Default: L.
CarmaTDR only.
Toggles the ability to turn the camera using the mouse.

Default: B.
CarmaTDR only.
Faces the camera to look back, as if seeing through a rearview mirror. 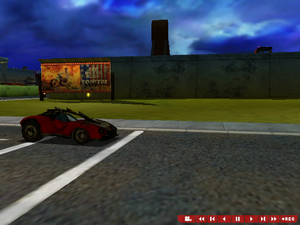 Default: Enter. Can't be changed in CarmaTDR.
PC games only.
Enters/leaves Action Replay mode, in which the player can relive an action that passed seconds ago.

Default: Z, C-down in Carma64.
Not in CarmaPS, CarmaGBC nor CarmaMob[confirmation needed].
Makes the wheels of the car turn more than normal. Also useful for other things, like skipping the countdown.

Default: Q.
Carma only.
When in cockpit view, makes the driver look to the left, seeing from the left window.

Default: W.
Carma only.
When in cockpit view, makes the driver look forward.

Default: E.
Carma only.
When in cockpit view, makes the driver look to the right, seeing from the right window.

Default: C, C-left quickly in Carma64.
Not in CarmaGBC nor CarmaMob.
Toggles the cockpit view mode, in which the player sees from the driver's eyes.

Default: Tab.
PC games only.
Shows/hides the fullscreen map, in which a map of the whole level can be seen.

Default: Page Down.
PC games only.
Buys an extra point of Offensive.

Default: ~, X in CarmaTDR.
PC games only.
Starts writing a message to be sent to everyone. Press Enter to send it.

Default: Alt, C-up in Carma64, A+B in CarmaGBC.
Not in Carma, CarmaPS nor CarmaMob[confirmation needed].
Uses the currently select item. 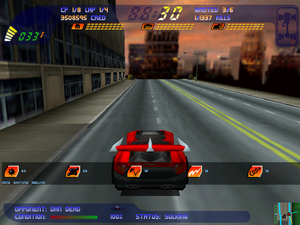 Default: ;.
Carma2 and CarmaTDR only.
Opens/closes the inventory, allowing you to see what items you have.

Default: [, A in CarmaTDR.
Carma2 and CarmaTDR only.
Selects the powerup to the left of the current one.

Default: ], S in CarmaTDR, C-right in Carma64, Select in CarmaGBC.
Not in Carma, CarmaPS nor CarmaMob[confirmation needed].
Selects the powerup to the right of the current one.

Default: N.
CarmaTDR only.
Displays the opponents' names on top of them.

Default: Return, D in CarmaTDR.
Carma2 and CarmaTDR only.
Opens/closes the doors. This is useful if a pedestrian was just about to pass harmless by the side of the car.

Default: H, E in CarmaTDR.
PC games only.
Sounds the horn, alerting and panicking nearby pedestrians.

Default: Space.
Carma2 only.
Shows the screen of another player during multiplayer[confirmation needed].

Default: T.
Carma2 and CarmaTDR.
The HUD will start/stop giving information about the same opponent, independently of another one being closer or not.

Default: Y.
Carma2 and CarmaTDR.
Locks on a different opponent.

Default: F1, H in CarmaTDR.
Carma2 and CarmaTDR.
Changes the HUD layout in combinations of the bottom bar being present or not, and size/components of the top bar; in Carmageddon II. In Carmageddon TDR 2000, it just enables/disables it.

Default: M.
Carma2 only.
Activates or deactivates the on-screen mini-map.

Default: -. (Two keys to the left of the backspace key.)
Carma and Carma2.
Decreases the viewing screen's size.

Default: +. (One key to the left of the backspace key.)
Carma and Carma2.
Increases the viewing screen's size.

Key: Ctrl+A.
Carma and Carma2.
Aborts the race as if the player had chosen the menu option.

Key: Ctrl+Q.
Carma and Carma2.
Quits the game as if the player had chosen the menu option. This means that it'll ask for confirmation in Carmageddon, but not on its sequel.

Key: Left+Right.
Carma and Carma2.
Places the camera behind the car if the player changed its angle. Also resets the camera to the car when using the Action Replay's manual cam.

Key: Up or Down.
Carma2.
When in cockpit camera, press Up to switch to bumper cam and down to return to the driver's eyes.

Key: Ctrl+D.
Carma2.
Takes a screenshot (screen dump) and places it on the DATA folder.

Key: F2.
Carma only.
Saves the game as if the player had chosen the menu option. This means that in a race, the game will say that the progress will be saved as it was before the race started.

Key: F3.
Carma only.
Loads a game as if the player had chosen the menu option.