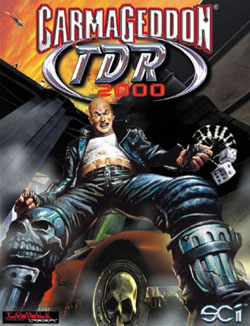 Carmageddon TDR 2000 is the last PC game in the Carmageddon trilogy, and the sequel to Carmageddon II. One of the biggest changes from the previous games is the improvement of the graphics and physics. Though that wasn't necessarily a good thing - its improved physics made the game less enjoyable and chaotic than its prequels.

The game was more story oriented than the rest. From the very first mission to the very last, the player had to fulfill certain requirements that would allow him to move on to the next location.

Carmageddon TDR 2000 is still enjoyed by several fans, and, like in its prequels, several customizations have been made.