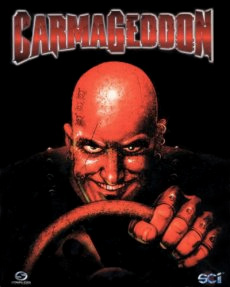 Carmageddon is the first of a series of graphically violent driving-oriented video games produced by Stainless Games, published by Interplay and SCi and released June 30, 1997 on Windows PC and Macintosh.

The main premise is to let players run over pedestrians, race trough checkpoints, or waste the opposition. This, along with powerups, complex locations and several drivers have made this game quite popular when it was released. It may even have influenced other sandbox driving games like the Driver and Grand Theft Auto series.