Carmageddon was a series of video games released between 1997 and 2005 by various developers and publishers, the main team being Stainless Software (developers) and Sales Curve Interactive (Publishers).

1 Stainless have stated they they were not happy with TDR2000 (which was made by a different company), and do not accept it as part of the series.

In early 1994, Patrick Buckland and Neil Barnden (the co-founders of Stainless Software) got fed up of racing games, tending to "[turn] the car around and [ram] the other cars out of the way". They came up with the idea of a Banger racing / Demolition derby game, putting together a rough demo. But there was little interest from publishers... until SCi came along.

SCi wanted a license to guarantee some return on its investment. They first sought permission for a game based on the Mad Max movies, but couldn't find who actually owned the rights. Then they learned that Death Race 2020, a sequel to Death Race 2000, was in development. Right up until Carmageddon shipped, the actual .exe file was called Deathrace. The movie eventually fell through, the only result being a short comic series in 1995.

After Deathrace's demise, SCi could have canned the project, but they thought it looked good. They decided to let Stainless try to create their own brand: The name "Carmageddon" was coined (a portmanteau of "Car" and "Armageddon"), and the team continued development.

The team started with eight people, aged between 22 and their early 30s. Experience and skills varied wildly, and Stainless had no real idea of the procedure in developing a video game. They settled upon the adage "if it sounds like fun, let’s try and do it". This was stretched to its limits when Tony (model for Max Damage and "absolutely mental") was repeatedly run over by a station wagon for research, then hit with a pool cue for Prat cam footage[1].

One of the main features of Carmageddon is to have human pedestrians roaming the streets during races, and awarding the player credits and bonuses for hitting them. When the game was still Deathrace, the player would lose points for doing so. It was Rob Henderson of SCi who made the decision: “Let’s just go for it”.

SCi, wanting to generate publicity for the game, submitted it to the British Board of Film Classification (BBFC) to get an 18 rating, even though the game contained no video footage. This backfired; The BBFC refused to certify the game unless all blood and gore was removed (despite "hooting with laughter and remonstrating themselves for enjoying [the game]", according to Barden).

When the British press learned of the game's content, all the newspapers shouted about how it would ruin the nations youth, and lobbied to get the game banned outright. Road Peace debated with Neil Barnden on the radio, Age Concern objected to the "I was in the war!" old lady, and a blind pressure group in Australia was offended by the Blind pedestrians power-up.

Buffered by George Carman QC and the support of SCi, Stainless fought the BBFC's decision in court, and won.[2] Begrudgingly, the board would let Carmageddon be released; they just had to make a few adjustments...

Running over non-human figures was considered acceptable by the ratings board, so the humans and cows were replaced with zombies (robots in Germany). After 10 months of appeal, the BBFC certified the original version, but in the interim a so called "Blood Patch" had appeared on the internet, which would restore the original humans to censored versions of the game. The source of the files was for a long time unknown, but eventually it was proven that it came from the developers.[3]

The N64, PlayStation and Game Boy Color games were censored versions, and had no way to patch in or unlock pedestrians. The smartphone re-release was the uncut Blood version, while preview footage of Reincarnation also features humans and red blood.

These games differed in that they were simple arena battles between drivers. They also had a small selection of usable weapons on their vehicles, and no (or very few) pedestrians to mow down.

The developers say that the total series sold around two million copies by 2008. The fourth game in the series was postponed in 2005, putting an end to the Carmageddon franchise.

There were a couple of imitators in the following years: Clutch (also known as Armageddon Riders), was released by Targem Games for PC in 2009. It involved racing around a city in a car with retractable blades, mowing down Zombies. A 2010 game called Blood Drive also featured zombies and vehicular combat, but added car-mounted weaponry.

The Carmageddon camp remained as silent as the grave, except for rights owners Square Enix issuing a Cease & Desist order to the OpenC1 mod in late 2010. 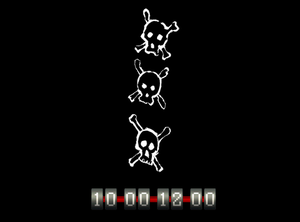 On 23rd May 2011, The official Carmageddon Website was revived. It displayed nothing but three skull & crossbones (Max Damages head tattoo) and a countdown timer in the style of the first game's menus.

The countdown ended on June 1st, 9am GMT. A new website was unveiled, along with news that Stainless Games had regained the rights to Carmageddon, and had begun development on a new title in the series. Carmageddon: Reincarnation was announced for a 2012 release (later amended to 2013).

On May 8th 2012 a project was launched on Kickstarter[1] to raise funds and awareness for the game. Many rewards were offered to pledgers, from exclusive in-game content to VIP party invites. Around this time, it was also announced that the original Carmageddon would be seeing a re-release on both Windows PCs (via Good Old Games) and on mobile devices (iOS and Android). The campaign reached its $400,000 goal with 10 days remaining, and ended at $625,143 raised.

The franchise has a very loose mythos. Censored versions of the game, strangely, have more plot than the Blood versions, commenting that the world is in ruin and zombies roam the earth. TDR 2000 expands the Zombie plot, adding in ghettos to contain the undead and damned, and a police state. The Blood versions have no discernible plot whatsoever, simply placing the player in the world.

There is also little to no continuity or ongoing storyline - Agent Orange and the second Grimm brother in Carmageddon Reincarnation are the only mentioned deaths, with Sinthea and Agent Orange being the only relationship, and the only related characters are Halfwit Harry, Burly Shirley and Helga Shwein as well as Don Dumpster and Ron Dumpster (who never made it to the final version of C2). The cast can change between games without warning or explanation. The vehicle a driver owns can also change.

The strongest story would have to be the one in The Carmageddon Comic, but even then the canonicity of it is debatable.