There are 4 characters - Max Damage (starting character), Dick Structor, Killer Queen, and Thunder B. Old. An unusual move sees the drivers separated from the vehicles - the player can select the driver and car separately. This means that unlike the other games in the franchise, it cannot be determined which car 'belongs' to which racer!

The four vehicles available to drive are: 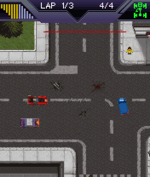 There are 36 levels in the game(s), and the player's goal is to beat them all. There are several game types:

Checkpoints race - A standard race through checkpoints against 3 other drivers: Come first for victory.

Destruction Arena - Waste the other competitors: Last one standing wins.

Team Destruction Arena - Same as above, only the player is teamed up with another car.

Hold The Flag - The player must bash any car carrying the flag to get it, then keep it for as long as (s)he can.

Pedestrian Hell - Run over as many pedestrians as possible in the time given.


Cars can have their stats upgraded between levels using Credits earned.

By default cars are set to accelerate automatically - this can be turned off in the Options menu.