Car damage occurs when a vehicle belonging to the player or an opponent is damaged.

Damage can be caused by collisions, falls, powerups and explosives. When a vehicle is damaged enough, it becomes wasted.

The car damage indicator is located on the HUD in the Carmageddon games. It shows which parts of the player's vehicle are damaged, and how damaged they are. An exception to this is the PlayStation game, in which there is no distinction between vehicle parts.

Damage can be fixed using the repair function.

The following examples show damage to the engine, from left (fine) to right (fatal).

Damage levels can also be determined by looking at the vehicle:

Carmageddon II introduced cosmetic damage, known as crushage. Sections of bodywork can become loosely attached, falling off if more stress is applied. Tail-/head-lights, windows and windscreens can also be smashed. 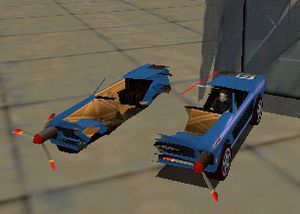 The sequel also added the ability to split a vehicle in half, either side-to-side or front-to-back. This almost always lead to car being automatically wasted. If the player car is split side-to-side, and more of the front half remains than the back half, the player can survive! Best repair quickly though...

Carmageddon II allowed cars to have their chassis bent out of shape. It is unclear how much damage this does, as it mostly happens to computer controlled opponents, but it can't be easy to drive when your car is shaped like a crescent moon!