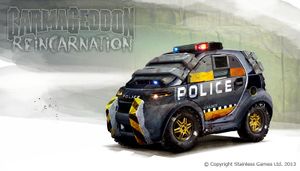 Concept art for the CU:NT.

The CU:NT is the newest addition to the cop squad. As opposed to the stronger, bigger armored police vehicles who have the job of taking down unlawful drivers, this little guy is aimed towards driving the police officers to more mundane judicial issues, like jaywalkers or litterers, or even helping stuck kittens.

As a result, this vehicle is naturally less armored, and less bulky. As such, it'll be more easily destroyed by the player, and cause them less damage and overall annoyance. Because of this, they'll also be more common than the regular APC.

The CU:NT first appeared in a playable level during the Pre-Alpha stage, in the level Countryslide (one of the second pair of maps to be released).