The Beaver Woods are the third location in Carmageddon II and Carmageddon 64. It's quite simply a set of woods, featuring several small mountains and hills, all covered in grass. Having several trees, these woods are a good place to set up a lumber camp. 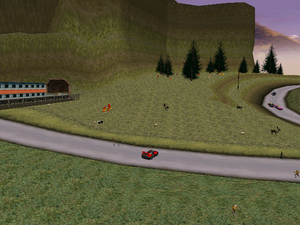 Max Damage driving on the road. The train can be seen on the left.

In the West, there are a pair of hills. One of the hill tops can be accessed by a looping tunnel. Right to the East of these hills lies the special feature of this location: the train. There is a small, linear track going from North to South, and every once in a while, a big train will pass by, coming out from either tunnel and entering the other. At the end of these tunnels lies a wall, which the train passes through. Like any drone, if the train is touched it'll act as an object and will no longer pass through the wall at the tunnels. If another train passes by, it can collide with this one. Most of the time, this makes the other part of the level unreachable, unless the player goes away for some time and comes back later.

There are small sets of cabins dotted around the level, most likely the lumberjacks' houses. At the center of the level lies a lumber camp full of goodies, as well as a gas station and a small psychiatric hospital. A bit to the East of the lumber camp is a large river, going all the way from the Northernmost part of the level to the Southernmost. There are two bridges at the South that allow access to the other side, yet there is none on the top. The player must use a ramp on either side to hop to the other.

To the Northeast is a mine that is entered by some small tunnels. It isn't that big, but can sometimes be a bit hard to get out of, and parts of it are littered with mines. Before entering the mines there are two roads, which turn back to the West in a U curve.

This level is sometimes frowned upon due to it being around 80% grassy terrain, which makes driving a bit tough. Despite that, the train can lead to very humorous situations, so the level is not so bad.