The Beaver Mountains are the fifth location in Carmageddon II and Carmageddon 64. It follows the usual snowy-land level cliché, featuring lots of snow, and lots of ice. But this is not just a set of mountains; it's also a winter resort with several attractions. 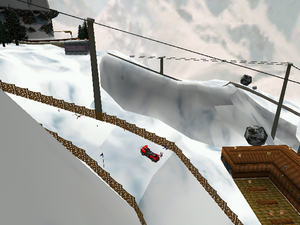 The track is mostly on road, and off the road there's pretty much just snow. There are some times where the race really drives through snow. These mountains are pretty high, and when down below, it's a bit hard to climb to the top. The road usually circles the level, and goes from the top to bottom at the East and West.

From the Northeast an alpine ski track runs all the way to the Southwest of the level. In the Northwest is the top of the level's ski jump track. The player can slide it, but to much speed can be a problem. In the West, there is a small ski track. To the South of it, and a bit to the East is a small Winter lodge, with some houses. One of the houses is surrounded in breakable glass, that has some useful powerups. At the back of these houses is a huge lake.

At the center pass two lifts that allow the people to access the higher and lower parts of the mountains. This lift wasn't made for cars, so smacking into it will turn it into a physics object. To the South of the higher lift's terminal is the start of a bobsled track. Cars are free to have fun sliding down it, though it can be a bit hard to keep straight all the time.

Other than that, the level is almost all snow, with several levels of elevation and inclination. There is a food shop, "Le Ski", at the North of the alpine ski track's end.