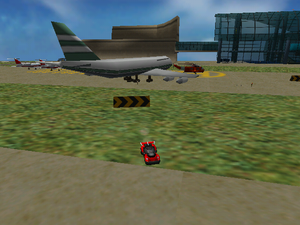 Max Damage next to a plane.

The Northern part of the level is mostly water, as one would expect, and the terrain is mostly grass, except for the runways and some trails outside the airport. A large lake lies to the East.

The level features the normal things one would find at an airport. There is the control tower at the center of the level, the airplane hangers, terminal and the monorail. More unusual is the back of an airplane sticking out of the cliffside.

Careless players may get hit by the ongoing airplane traffic, but it is also possible to cause the plane to crash while it performs it's regular touch-and-go landing.

Some players like this location whereas other don't. For some the terrain may be too bland, and to others it may be too bumpy.