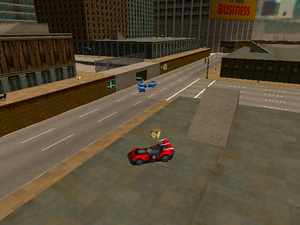 Max Damage on a rooftop.

The city can almost be classified as divided in two. The Western half is a regular city, with lots of buildings and roads; the Eastern half features a very low amount of roads surrounded by grass. Sometimes, it's a bit of a pain to reach the opposing half. A highway practically circles all of the left half, and a sub-section of this highway allows passage to the right side.

Like any city, this one has some stores. They aren't shown as such, but can be identified by looking at their signs. A major building in this city is the bank at the South. Obviously, the drivers can't get out of their car and withdraw some money out of their accounts, but they can do something far nastier. In the middle of the bank lies a safe that has some extra credit powerups. Sadly, the lockers lining the walls (and possibly containing further riches) can't be opened.

Other spots include the gas station, a bit Westwards from the middle; a car wash at the Southwest; and the Shop shop at the West.

The building's rooftops can be reached, and they normally feature ramps that allow access to a nearby, usually taller, building. Mastering these ramps is necessary to complete the second mission, Eye of the Beaver.

Most players like this level because the city theme represents what true carnage would be like. Killing pedestrians at, say, an aircraft carrier is a more surreal scenario.