APO is the acronym used for the performance ability stats in the Carmageddon series. These traits are present in almost every game, and the higher they are, the more powerful the player is. These are not limited to a single vehicle, rather, the same stat is shared for all cars in the player's garage.

Depending on the game, these can be improved by buying them, or by collecting their respective powerups. APO powerups are the only ones whose pickups have a specific appearance. These are normally located in hard to reach places. However, some of them can be disguised as regular pickups.

The armour stat determines how well the vehicle can sustain damage. It's usually identified with a Barbute helmet.

The power stat determines the engine's acceleration. The higher this is, the faster the vehicle accelerates. This adds the cars' individual acceleration stat, which means that Vlad's car, for instance, can accelerate even faster if it has more power. It's usually identified with an engine.

The offensive stat determines the damage caused by the car. The higher this is, the more damage and crushage the vehicle inflicts on opponents and pedestrians. It's usually identified with a glove forming a fist.

This is probably the most overpowered of the three; in almost every game, wasting opponents is a tough task, but with full offensive, a medium impact is more than enough to take most opponents down. As a matter of fact, having a lot of offensive can eliminate the need of the Solid Granite Car powerup on Trucking Hell: The Eagle 3 can waste the Big Dump with full offensive by merely driving forward.

Carmageddon II introduced slots to the APO system. Each statistic has a set number of spaces available. However, before being used, slots must be bought to fill those spaces. In turn, slots can be filled with APO points.

Carmageddon and the Splat Pack

In Carmageddon, the player upgrades these stats by visiting the Parts Shop and spending some credits. Armour, Power and Offensive all have 5 levels of parts to be bought, plus a 'cheat' 6th level unlocked when the player completes the game. 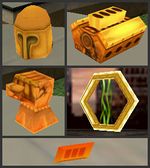 The second game has 30 slots for each APO ability. The player starts with 2, 4 or 7 slots filled in each, and more slots can be filled by collecting items hidden around the levels, or by buying them at any time using the buy Armour, buy Power or buy Offensive keys.

The tiers of races, from 1 - 10 have a limit of the max # of slots you may have at once. You will need to complete the challenge mission to unlock the next series of races, which also unlocks the ability to gain more slots (usually 2.)

If after beating the game, you go and do a previous mission and pick up an APO slot increaser, the game will reset what should be your higher level of slots, to what it was assigned for in that tier of race you are competing in. Example: You have nearly maxed out slots, and you pick up a slot upgrade in Tier 1 Beaver city. The game will now reduce your max # of slots down to what it was when you first started the game!

This game takes ideas from the previous 2 systems: Out of 30 slots in each category, players start with 7 available and 1 filled. On the choose car screen, credits can be used to buy more slots or to fill available ones.

The collectibles from Carmageddon II (but not the tokens) reappear in the multiplayer mode. The Armour powerup was redesigned as a different helmet (from a Barbute to an Armet), and the hexagon shape replaced by an Eagle emblem.

The APO powerups in this game don't have their own pickups: they are found in regular barrels instead.

In the cellphone version cars have 5 stats instead of 3: Speed, Acceleration, Grip, Armour and Damage Power. There are 24 slots available for each stat. At the start of the game each car has a different amount of these slots filled, and more slots can be filled with credits earned in the levels.